The one and only Dave Matthews Band comes to Alpine Valley Music Theatre on Friday 5th July 2019 for a two-night run of DMB goodness! One of America's most popular touring acts, and with good reason, Dave Matthews Band never disappoints! The group is touring in support of its most recent album, Coming Home (2018), and will be performing in over 40 cities on this annual summer tour! 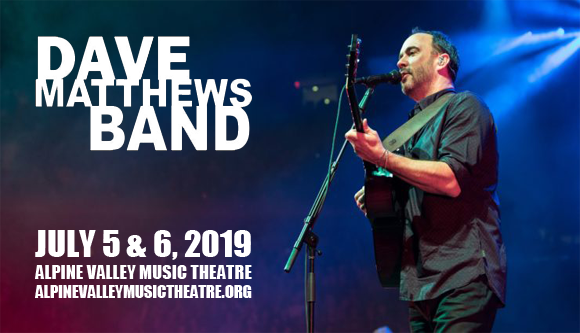 A 1990s radio staple turned iconic live act, American rock group Dave Matthews Band started in Charlottesville, Virginia in 1991. A popular act in the local frat houses and coffee shops, the group began to garner a following throughout the early '90s and they were soon signed to RCA Records. Their 1994 debut album, Under the Table and Dreaming, was a huge hit for the band – it launched three successful singles and has been certified six-times platinum by the RIAA. Their follow-up, Crash (1996), brought the band to an international audience and won them a Grammy Award for Best Rock Performance by a Duo or Group for the song "So Much to Say". From there, the band's popularity has gone from strength to strength, with iconic live shows, a plethora of awards and nine studio albums under their belt. Since the band began, they have sold more than 100 million tickets, and a collective 91 million CDs and DVDs combined. With 2018's Come Tomorrow, their ninth and most recent studio album, Dave Matthews Band holds the record as the first group to have seven consecutive number-one albums on the Billboard 200.