Phish's live shows are infamous and this summer they'll be stopping by Alpine Valley Music Theatre for three nights of pure Phish bliss! The legendary group perform for the second night on Saturday 13th July 2019, thrilling fans with an utterly unique set of classic material and delivering what is sure to be a memorable performance! Every Phish show is a story in the making and this one is sure to be no different! 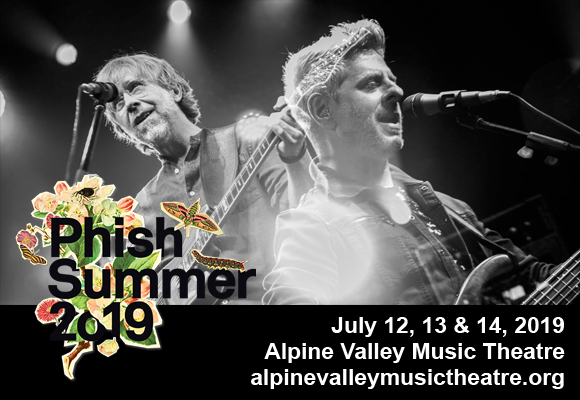 World-famous American rock band Phish formed at the University of Vermont in 1983. With a devoted following of fans similar to that of the Grateful Dead, Phish are well known for their spontaneous and collaborative live sets and extensive touring. Over the years, the band has released thirteen studio albums and has sold over eight million albums and DVDs in the United States. The group's current line-up of "Trey, Page, Mike, and Fish" (lead vocalist and guitarist Trey Anastasio, bassist Mike Gordon, keyborad player Page McConnell and drummer John Fishman) has performed together on-and-off for over thirty years. The band's genre-defying music, which touches upon a myriad of influences from reggae to straight up rock to free-form jazz, always retains an undercurrent of fun, bringing party vibes to every performance.